Traveling expose me to different culture, and one of big aspect of culture  is food. One can’t fully fathom the culture of a place without studying its cuisine.

My recent trip, brought me to Ilocandia, to attend the 4th National Tour Guides Convention in Laoag, Ilocos Norte.

Since my roots is from there, i went ahead of schedule to find time to visit my relatives from my fraternal grandfather side of the family tree.

I arrived very early from an overnight bus ride from Manila, that upon arrival i asked for a bed to take a nap.

After a good two hours nap, i took a bath, a very refreshing and energizing one.

There were people in the drive way of my cousin’s house, I went out to see what there up to. There i saw my Aunt, my cousin and a lady with her kid busy doing something.

Went closer to se what she was doing;

As they call it “palakang bukid” or farm frogs. Surprisingly it has white meat.

I went for a walk, but the image of the frog being skinned keep playing in my mind. I went back just in time my cousin was prepping for dinner.

We had frog adobo and frog tinola.

My cousin said she did not cook any other dish so i will be forced to eat the dish on the table.

My brain is killing me, and all of them were making fun of me..

Then I give the frog my first bite, and it does taste like chicken, and the Ilocano way of cooking made it “Masarap”.

And from then on it give me another perspective of this creature.

And you don’t have to take my for it.. you have to try it yourself…

Tour Guides from all-over the country converges in Laoag for the annual National Tourguide Association Federation Convention(June 16 and 17).

Like in the past  convention delegates would come ahead of time and go on tour.

All the delegates stays in Laoag, excluding me, I am here at the house of my cousin.

“Wen Ilocano ak” YES. I am Ilocano. 1/4 at that. My fraternal grandfather is GI (Genuine Ilocano) married a Negrense that made father 1/2, who also married a negrense, and made me..

Anyway my Ilocano lineage would be a subject of another blog.

I got a call from Cebu delgation if i will go with them to Vigan, i told them i rather wait at Juan Luna Shrine which is just next block to my cousin’s house.

Since it was my second time to visit Ilocandia, and been to Vigan already last year, i opted to go on my own.

After all of them left Juan Luna Shrine, I hoop on a north-bound bus to the junction of Pinili.

Then at the junction I boarded a tricycle.

I went to the Kul-labeng Historical Site.

Kul-labing was used to be part of Badoc, is the birth place of Iglesia Filipina Indepediente also known as Aglipayans. It was here during the 42nd birthday(May 5, 1902) of Gregorio Aglipay were they declare there independence from Vatican. The event was now known as the Kul-labing Assembly. 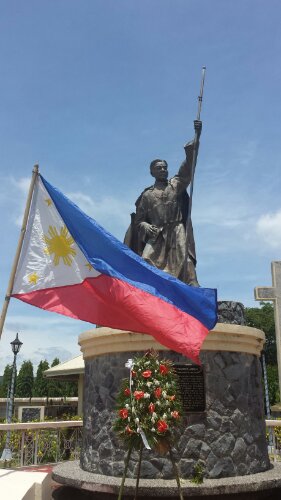 Monsignor Gregorio Aglipay a rebel priest went to the thickly forested area and form a sandatahan (armed) movement to fight againts the American at the heigth of Filipino-Amirican War.

The Town is so grateful to Aglipay that I sighted 3 Monument of Aglipay (2 full bodied 1 bust) but only have one for Rizal; a bust

Here are the other two monuments:

Next town I Visited was the town of Magsignal, Ilocos Sur. A 3rd class municipality peopled by 27,615 in 5,311 households according to the latest census.

Although modernity is creeping in, the town is still very rich with vesteges  of the glorious past. 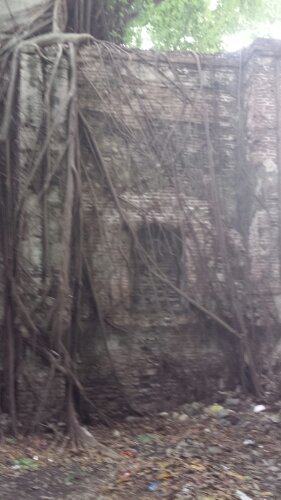 I felt my writing skill is not worthy, so i will let my pictures speak the thousand words.

After walking under the Ilocandia Sun, I treat my self with Ilocos pride, EMPANADA not one but two. 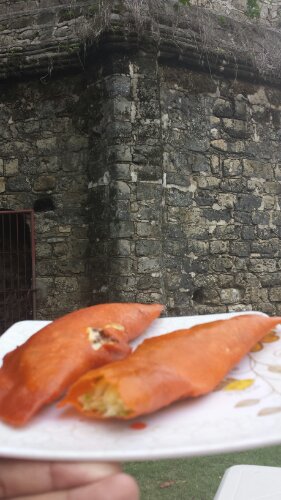 Empanada dough is made from ground rice. 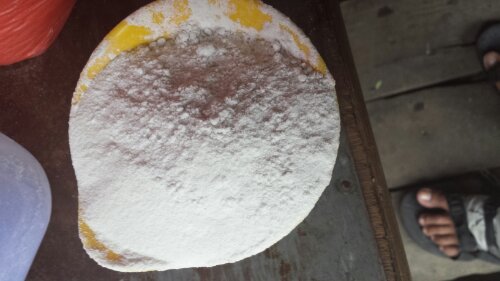 Mixed with water and food color 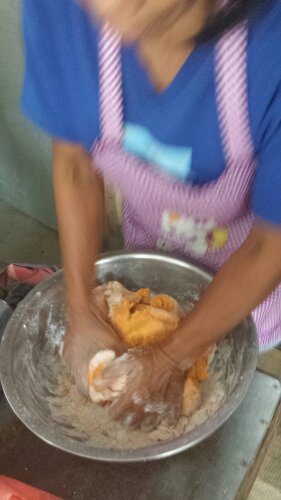 Filled with veges and egg for ordenary and with additional ground pork for special. 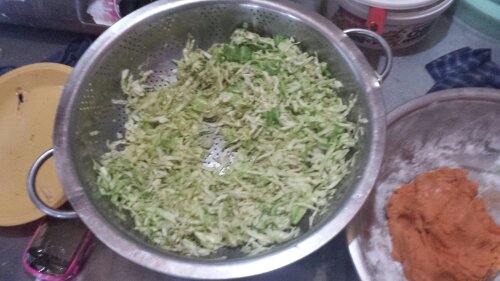 The Empanada is available all over Ilocos Sus and Norte. Only Lucky and Neo Empanada in Magsingal offers this ambiance 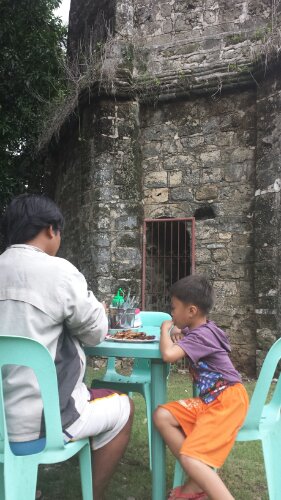 I need to put down my Galaxy S4 (the gadget i used in writing this post) for dinner is ready.. promise i will write a blogpost about it.. main course is Frog.

Aloguinsan a small town in midwest Cebu peopled by either Farmers or Fisherfolks. But thanks to its leaders who had a visions, and foresight, gives Aloguinsanons some infrastructure project that is at par with some big cities in the country.

Take for example their public market, at a certain angle it look like Ayala’s The Terraces.

Actualy the market also doubles as a park, with a big open space that can be used for public exibition and performances.

The leaders must posses “good taste” inspite being a small town in the countryside, they did not settle for “baryotic” or “baduy” design.

If only we can have leaders all over the country like what Aloguinsanon had, we can make this nation beautiful.

The Way They Eat

You would know that  Philippine Independence Day Celebration is just around the corner when you suddenly sees a lot of Philippine Flag being displayed. Then we come to relive the lives of our Heroes who fought for our Independence from Spain. But if we really had Independence on June 12 or was it the 4th of July?(that would be another blog subject)

Yes we are aware how brave our heroes were, but did we stop and ask: what were the constitution of their diets? what do the mochacho serve on the revolutionaries’ table?

Cafe Marco of The Marco Polo Plaza Cebu takes you back a Century on a Culinary Journey that the explores the kitchen of the Yesteryears in Philippine History.

On June 7 to 16, 2013, come and savor Café Marco’s wide selection of our favorite Filipino dishes with Spanish influence on top of the international buffet. Feast with friends and family on dishes reminiscent of Filipino family gatherings such as Arroz ala Valenciana, Pata Humba, Mechado, Adobo de Carajay, Bangus Salad with Kesong Puti and a lot more! All these cooked perfectly from the Café Marco Kitchen with the culinary expertise of Cebu’s Culinary Guru, Ms. Jessica Avila.