The Globe triathlon team prepares for the sixth staging of Ironman 70.3 Philippines

Leading telecommunications company Globe Telecom is once again the official technology partner of Cobra Energy Drink IronMan 70.3 Philippines.Philippines which is set to take place in the Historic Resort City of Lapu-Lapu, Cebu on August 3, 2014 with about 2,500 participants from various parts of the country and abroad.

Globe, a strong supporter of Ironman 70.3 Philippines since it was introduced locally in 2009, will provide WiFi connectivity, laptops, Tattoo sticks, and cash support to the game to ensure that organizers, athletes, and spectators can have a wonderful digital experience which they can share with the rest of the world.

Twelve of the participants belong to the Globe Triathlon Team which regularly competes in Ironman 70.3 Philippines since it started six years ago. Team Globe expects to better their personal best in the local premier event.

“With the continued growth of the sport, we are seeing tough competition from veterans and newbies alike. But through the support from Human Relations as well as from various groups in Globe such as the Prepaid and Postpaid teams and the International Business Group, our employee athletes pose to give a good showing as they toe the line with other multisport enthusiasts,” said Team Captain Elmer Santiago.

This year’s event promises improvements on the swim course as well as transition areas to accommodate the larger field. The slight change on the bike route presents a new challenge while the ever scorching run course will further test the athletes’ stamina.

Ironman 70.3 is an international triathlon competition that takes place in over 30 countries around the world. The event offers a unique racing opportunity to old and aspiring triathletes as it challenges them to stand out and be their best in three major endurance sports – swimming, biking, and running. Highly anticipated by over thousands of athletes and sport enthusiasts all over the world, Ironman 70.3 Philippines consists of a 1.9 km-swim, a 90-km bike, and a 21-km run. 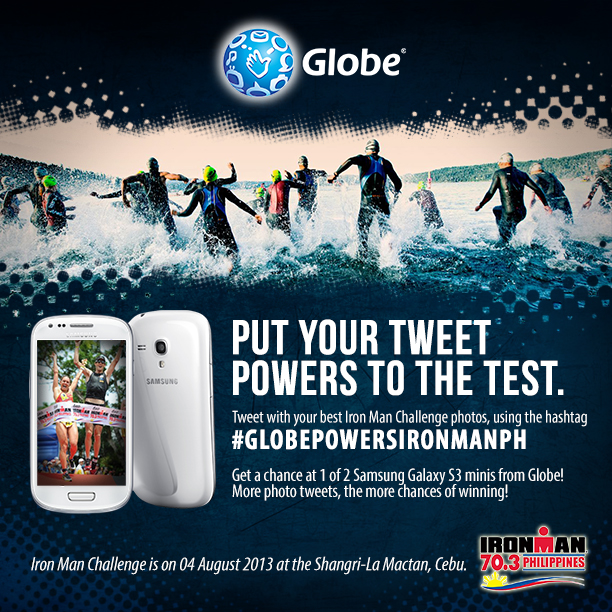 Telco giant Globe Telecom is one of the sponsors of Cobra Ironman 70.3 Year 5.

Globe, which is a strong supporter of Ironman 70.3 Philippines since it was introduced locally in 2009, will be tapping the power of social media during the event to bring the message to the world that Ironman is entertaining and enjoyable in the Philippines.  Such will be made possible by the high-speed broadband internet connection Globe will provide at the venue.

“We want to give everyone a wonderful digital experience through our improved network by providing them an opportunity to share their Ironman 70.3 experience using Twitter and Instagram. We want to show people not only in the Philippines but also abroad that Globe makes Ironman fun,” said Yoly C. Crisanto, Head of Globe Corporate Communications.

For this year’s Ironman 70.3 Philippines, about 2,150 participants from 35 countries worldwide are expected to join either the individual or relay competition composed of swimming (1.9 kilometers), biking (90 kilometers) and running  (21 kilometers) activities.

The most number of foreign delegates is expected to come from Singapore, followed by Japan, Australia, US, and Hong Kong.

Being a World Triathlon Corporation sanctioned event, winners of Ironman 70.3 Philippines are entitled to slots to the World Championships in Las Vegas, Nevada onSeptember 8, 2013.
PR.